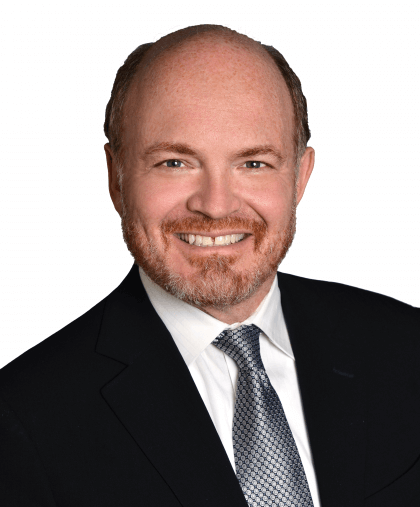 In his 35 years of practice, Ken has primarily focused on resolving complex business, entertainment, and IP disputes and is renowned for representing individuals and companies with his pragmatic aggressiveness, relatability, business acumen, and ability to handle everything from everyday business disputes to complex, ground-breaking cases.

Ken is a seasoned litigator and trial counsel licensed to practice in the state and federal courts of New York and California (among other courts) and has had notable successes in trials, arbitrations, and administrative proceedings in various settings ranging from California Labor Commission proceedings, to IFTA, Guild, and AAA/JAMS arbitrations, to Copyright Rate Court proceedings, to trial and appellate courts (including the United States Supreme Court). Ken is a well-known participant and moderator in panels concerning entertainment law issues.

Ken’s experience also includes a stint as the Executive Vice President of Atomic Pop, LLC, an early 2000’s internet-based record company (way ahead of its time) that sought to provide a platform to distribute entertainment content through digital media. At Atomic Pop, Ken was part of the company’s leadership team, navigating through complicated new media legal and business issues, acquisitions, strategic and financial planning, syndication, joint ventures and due diligence management.

A proud graduate of UCLA’s joint JD/MBA program, Ken is one of the few litigators who does not shy away from the quantitative or business side of cases. Whether it is grilling the opposing party’s experts about complex royalty statements, unraveling a party’s intricate corporate structures and related corporate issues, or negotiating and drafting an agreement to resolve a dispute or pave a way forward in business to maximize a client’s bottom line, Ken’s varied education and experience give him a bespoke set of skills with which to serve his clients.

Represented Pandora Media, LLC (and its predecessor Pandora Media, Inc.) in a mass copyright infringement action brought by a prominent music publishing administrator where Pandora successfully moved to dismiss on standing grounds under the 1909 and 1976 U.S. Copyright Acts, which substantially reduced the number of works at issue.

In an artist/manager dispute between “Judge Alex” (former Florida trial court judge and star of his own eponymous court television show) and his manager Arnold Preston, obtained a favorable 8-1 decision from United States Supreme Court in favor of my client Mr. Preston, holding that when a party seeks to enforce a valid arbitration clause within an agreement, the Federal Arbitration Act requires that the dispute must be heard by an arbitrator, rather than by the state administrative agency (there, the California Labor Commission) that would otherwise have had mandatory exclusive jurisdiction over the dispute. Preston v. Ferrer, 552 U.S. 346 (2008). After the Supreme Court victory, the case settled.

In twelve years of ongoing litigation between four former members of platinum recording artist WAR and Jerry Goldstein and his various publishing and record companies, obtained: (i) $3,000,000 judgment for past accounting claims; and (ii) Court of Appeal decision in a subsequent royalty dispute, reversing summary judgment against clients involving complex issues of contract interpretation under California law (including the proper role of extrinsic evidence) underlying a continuing royalty dispute between our clients and their music publisher. Brown, et al. v. Goldstein, et al., 34 Cal.App.5th 418 (2019).

In a high-profile lawsuit by our entertainment manager clients against actress Zooey Deschanel, successfully obtained summary adjudication, resulting in a complete dismissal of the breach of fiduciary duty Cross-Complaint against our clients. Seven Summits Pictures and Management, LLC v. Zooey Deschanel, LASC Case No. BC604072. The case then settled.

Represented Grammy Award-winning artist Joan Osborne in defending a lawsuit filed by her former manager Jonathan Waxman. After discovery, motion practice and pre-trial preparation. The case settled as the jury was seated.

Successfully represented musical artists in multiple matters invoking claims under Section 28 of the SAG-AFRA Commercials Contract, including representing a Grammy award-winning hip hop group in a SAG arbitration against a major national retailer.

Successfully represented a well-known producer in numerous IFTA arbitrations on behalf of a well-known film producer to recover unpaid monies from foreign distributors in Israel, Russia, Greece, and Eastern Europe.

Successfully brought a motion to amend or correct judgment, as well as an opposition to a post-judgment attorney’s fees motion, in a copyright action where our firm was retained immediately after issuance of a judgment that had erroneously sua sponte awarded attorney’s fees against our author client.  Not only did the Court correct the erroneous judgment, but it also denied the opposing parties’ post-judgment motion for $100,000+ in attorney’s fees.  King v. IM Glob., 2017 WL 2620695 (C.D. Cal. Jan. 25, 2017).

Successfully represented award winning Latin recording artist Prince Royce in an action brought against him by his former record label. The case was hard fought and resulted in an amicable settlement. Prince Royce thereafter signed with Sony Music Latin.

Represented a major television network and a production company in a lawsuit brought by a plaintiff who asserted right of publicity claims based upon allegations that she did not consent to her role as an extra on a television show.   The case settled quickly and favorably following a letter threatening an Anti-SLAPP motion on copyright preemption and First Amendment grounds.

Represented Paul Simon and was Associate Producer for Paul Simon’s Concert in the Park 1991.

Represented the producers of the Academy award winning film When We Were Kings including clearing the film and defending several litigations concerning the chain of title and credits which were all amicably resolved.

Successfully brought a motion to amend prior counsel’s pleading to include a breach of partnership claim in a case filed by Bounce Entertainment against Conde Nast, et al., concerning the production of a show called Women In Film. Conducted discovery and the case settled thereafter.

Successfully represented Grammy-nominated singer-songwriter Andra Day in a California Labor Commission proceeding brought by Ms. Day when a former manager/record label filed suit to prevent Ms. Day from recording with another label. After a hearing at the California Labor Commissioner, the matter was settled. Ms. Day thereafter signed with Warner Bros. Records through Buskin’ Records.

Successfully represented a television actor in an action brought by her former manager for commissions. After filing a labor commission proceeding and taking several depositions the matter was amicably settled.

This website uses cookies to improve your experience while you navigate through the website. Out of these, the cookies that are categorized as necessary are stored on your browser as they are essential for the working of basic functionalities of the website. We also use third-party cookies that help us analyze and understand how you use this website. These cookies will be stored in your browser only with your consent. You also have the option to opt-out of these cookies. But opting out of some of these cookies may affect your browsing experience.
Necessary Always Enabled

Performance cookies are used to understand and analyze the key performance indexes of the website which helps in delivering a better user experience for the visitors.

Analytical cookies are used to understand how visitors interact with the website. These cookies help provide information on metrics the number of visitors, bounce rate, traffic source, etc.

Advertisement cookies are used to provide visitors with relevant ads and marketing campaigns. These cookies track visitors across websites and collect information to provide customized ads.

Other uncategorized cookies are those that are being analyzed and have not been classified into a category as yet.